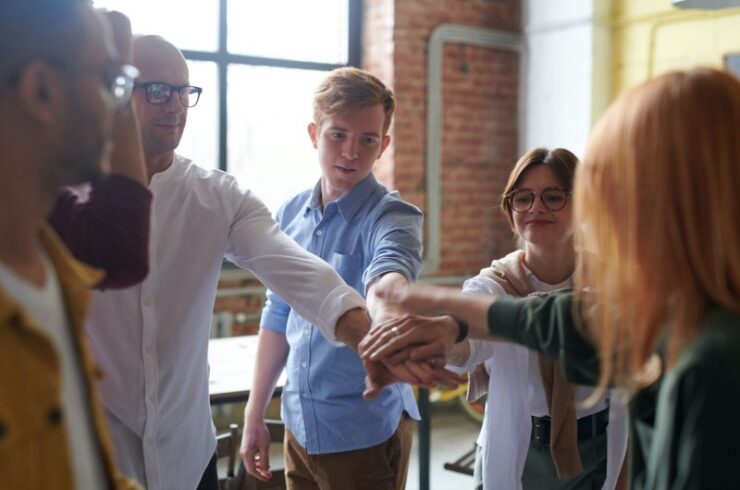 If you have ever been tasked with putting a team together and making it work, you’ll be well aware of the difficulties. Personalities clash, miscommunication is rife, and it can all seem like a lot of hard work for little reward. Bruce Tuckman, an American psychologist, observed in 1965 that teams go through a predictable five-stage process: forming, storming, norming, performing, and adjourning.

Once you understand this model, you’ll be far better positioned to manage and get the most out of your team. Let’s explore each stage in more detail.

The forming stage is the very beginning of a team’s life cycle. Foundations are being laid, but the concrete is still setting; the team is just getting organized. Members are trying to get a sense of their teammates, what the team’s goals are, and how everyone can work together most effectively.

There’s a lot of uncertainty at this stage as people try to figure out their roles and where they fit in. Anxiety levels are high, because everyone is worried about making a mistake and looking bad. The team is usually quite formal and polite, deferring to the more experienced members.

In this stage, some of the observable behaviors include:

The emotions commonly felt in this stage are:

How to successfully navigate this stage

When teams are being led through the forming stage, there are a few things the leader should keep in mind in order to progress smoothly to the next stage.

First of all, it’s important to note that your team members will be looking for guidance and structure at this stage. They need to know what’s expected of them, and they need someone to tell them what the goal is. So be clear about your expectations and be explicit about the team’s goals.

It’s also crucial to let team members explore and experiment during this stage. Give them time to ask questions and test out different ideas. This is how they’ll figure out their strengths and weaknesses, and how they can best work together.

And finally, be patient. This stage can take a while, so don’t expect too much progress right away. The team is just getting started, and there’s a lot of groundwork to be laid.

Clouds are forming, and a storm is on its way. In the second phase, conflict is beginning to brew — and team managers can be easily caught out if they aren’t monitoring the team closely.

In the storming phase, team members are testing the boundaries of their new relationships with each other. This can result in conflict as people try to figure out who is in charge, who is responsible for what, and how decisions will be made.

The storming phase can also be a time of high stress as team members try to adjust to their new roles, leading to clashes and arguments.

When your team enters this second stage, you’ll begin to see signs like:

Some of the emotions being thrown around at this time include:

How to manage the storming phase

When navigating the icy waters of the storming phase, team managers need to be prepared for conflict. The key is to not let the conflict spiral out of control, and to intervene when necessary to help the team move forward.

Also keep in mind that your saving grace here will be the enforcement — and continual reinforcement — of structure. Make sure every person knows their role and what is expected of them. Have set decision-making procedures, and make sure everyone follows them. And finally, keep the team focused on achievable goals.

If you can successfully manage the storming phase, your team will move on to the norming stage — where they’ll be productive and effective working together.

After a week of personality clashes and arguments, you enter the meeting room to a beautiful sight: people are sitting in small groups, chatting and laughing. You have successfully made it to the norming stage.

Norming occurs when team members have developed a mutual understanding of their roles and expectations of one another. In this stage, the team has started to gel and people are working together. The group is now able to accomplish tasks by working together cooperatively

The norming stage is often a time of creativity and productivity. The team has worked through their problems and can now focus on the task at hand. However, there may still be some tension present in the group as people work to find a balance between their individual needs and the needs of the team.

During this time, you’ll begin to notice a few key signs:

How to navigate this stage effectively

In order to move through the norming stage to the light at the end of the tunnel, team leaders need to focus on encouragement and positive reinforcement. Offer constructive feedback, but make sure it’s framed positively.

Note that the norming stage is highly dependent on the free flow of data between group members. Provide plenty of opportunities for team members to communicate and share ideas. Make it clear that everyone is welcome to share their thoughts, even if they’re not totally confident.

Finally, resist the urge to micromanage. Let the team figure out how to best work together. This can be a challenging process, but it’s important for the team’s development.

Once your team has reached the height of productivity and cooperation, you’ll know you’ve hit the performing stage. This is where members are able to operate as a cohesive unit and complete tasks with little supervision. The team has also developed a mutual understanding of each other’s roles and responsibilities, which allows them to work efficiently together.

Not all teams reach this stage — in fact, it’s what sets the high-performing teams apart from the rest. If you’re looking to take your team to the next level, it’s important to understand and embrace the behaviors that come with this stage.

When your team is performing at their peak, you’ll notice the following:

How to move through the performing stage

If your team is developed enough to reach the performing stage, well done! But don’t rest on your laurels — there’s still work to be done. The goal now is to maintain the team’s high level of productivity and cooperation.

Ideally, you’ll keep your team in this phase until they’ve completed all their assigned tasks. You can help facilitate this by stepping back and allowing them to work autonomously. However, you should still be available to provide guidance and support when needed.

It’s also important to continue fostering a sense of trust and cooperation among team members. This can be done by celebrating team successes, and addressing conflicts in a constructive manner.

Congratulations! You’ve successfully developed your team from its shaky beginnings to a high-functioning, productive unit. But even the best things must come to an end. The final stage in Tuckman’s model is adjourning, which marks the end of a team’s existence.

During this stage, team members may feel reluctant to let go of the camaraderie and productivity they’ve worked so hard to achieve. However, it’s important for team members to remember that the end of a team’s existence doesn’t have to mean the end of their relationships with one another.

In fact, many team members may find that they stay in touch long after their team has disbanded and continue to collaborate on future projects. The adjourning stage is a time for reflection and appreciation, as team members look back on all they’ve accomplished together and say goodbye to the team they’ve grown to love.

Closing out your team journey

One of the most important things to remember is that every group project should end with closure. This means taking the time to reflect on what you’ve accomplished as a team, and what you could have done better.

It also means thanking everyone who made contributions — both big and small — to the success of your project. You want your team members to feel appreciated, and closure is a great way to show them how much you appreciate their hard work.

Finally, don’t forget to document your team’s journey! Keeping a team journal can be a great way to reminisce on past projects and reflect on the lessons learned along the way.

If you are forming or leading a group, feel free to use this guide of Tuckman’s Model as a reference. Remember that every group project is different, so feel free to adapt these stages to fit the specific needs of your team. And most importantly, have fun and enjoy the journey!