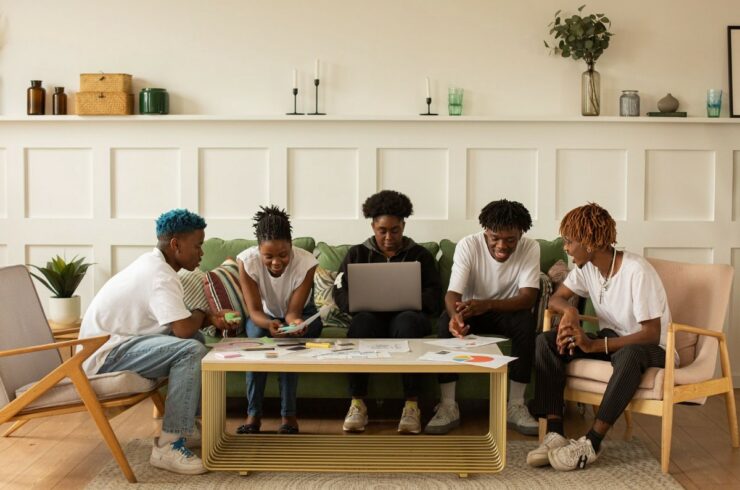 The Five Stages Of Team Development: How To Get Your Team From Point A To Point B

Throughout your career thus far, it is likely that you have encountered at least one instance where you were part of a team. Whether it was for a class project, extracurricular activity, or job-related task, being part of a team is an important life skill.

However, not all teams are created equal. Some teams are more effective than others and can achieve more results in a shorter time frame. How does this happen?

It all comes down to how the team progresses through each development stage. There are five stages of team development: Forming, Storming, Norming, Performing, and Adjourning.

In this article, we will explore each stage in detail and provide tips on how to get your team from Point A to Point B. Let’s go!

In the business world, it’s a well known fact that teams are essential for success. But what’s not so well known is the fact that teams don’t always start out efficient and organized. It takes time and effort to get a team from point A to point B — and that’s where the five stages of team development come in.

The five stages of team development were first introduced by Bruce Tuckman in 1965, and since then, they’ve been used by managers all over the world to help their teams reach their full potential.

The five stages are as follows:

1. Forming — In the forming stage, team members are getting to know each other and trying to figure out how they can work together. This is a time of uncertainty and confusion, as team members are trying to determine their roles within the team.

2. Storming — The storming stage is when things start to get a little bit rocky. Team members are starting to test each other’s boundaries and figure out who’s in charge. This can be a difficult stage, as there is a lot of conflict and tension.

3. Norming — The norming stage is when the team starts to gel. Team members start to develop trust and respect for each other, and they start working together as a unit. This is a productive stage, as the team is now able to start tackling tasks and achieving goals.

4. Performing — The performing stage is when the team is firing on all cylinders. They’re working together smoothly, they have a clear vision and they’re achieving their goals. This is the ideal stage for any team, and it’s what every team should strive for.

5. Adjourning — The adjourning stage is when the team comes to an end. This can be due to a number of reasons, such as the team completing its task or disbanding due to conflict. Regardless of the reason, this is the stage where the team officially ends.

Every team will go through these stages, but not all teams will reach the performing stage. It takes time and effort to get a team to reach its full potential — but it’s well worth it in the end.

So, how can you get your team from point A to point B? Let’s go through each stage in a bit more detail.

The first stage of team development is Forming. This is when the team comes together and starts to get to know each other. The team will likely be excited to work together and will have a lot of energy. However, they may also be uncertain about their role in the team and what is expected of them.

Some key indicators that a team is in the Forming stage include:

If your team is in the Forming stage, there are a few things you can do to help them progress:

The second stage of team development is storming. This is where the team starts to clash and argue. The team members are trying to figure out their roles and what the team should be doing, which can lead to some conflict.

This stage is likely in full swing if your team is:

If your team is in the storming stage, there are a few things you can do to help move them on to the next stage:

In the third stage of team development, Norming, the team begins to gel. Members start to trust each other and feel like they are part of a unit. This is often when the team starts to produce its best work.

The Norming stage typically lasts for four to six months. During this time, the team will likely:

To help your team reach the Norming stage, you can:

In the Performing stage, you will begin to see your team taking on a life of their own. They are now able to work independently and are self-sufficient. The team is able to handle most tasks and can complete them without much help from you.

The Performing stage is marked by high productivity and efficiency. The team is able to churn out high-quality work at a fast pace. This is the stage where you will see the team taking ownership of their work and truly becoming a cohesive unit.

There are some key things to keep in mind during the Performing stage:

The final stage of team development is adjourning. This stage occurs when the team’s work is completed, and the team dissolves. The members may go their separate ways, or they may stay together to form a new team.

To assist teams in adjourning successfully, you can:

Each of these stages plays a crucial role in bringing a team from Point A to Point B. However, not every team will progress through these stages in a neat, linear fashion. As a leader, it’s important to be aware of the different stages your team is going through and how you can help them move forward.

When leading a team through Tucker’s five stages, keep in mind the following tips:

By following these tips, you can help your team move through the five stages of team development and achieve success.