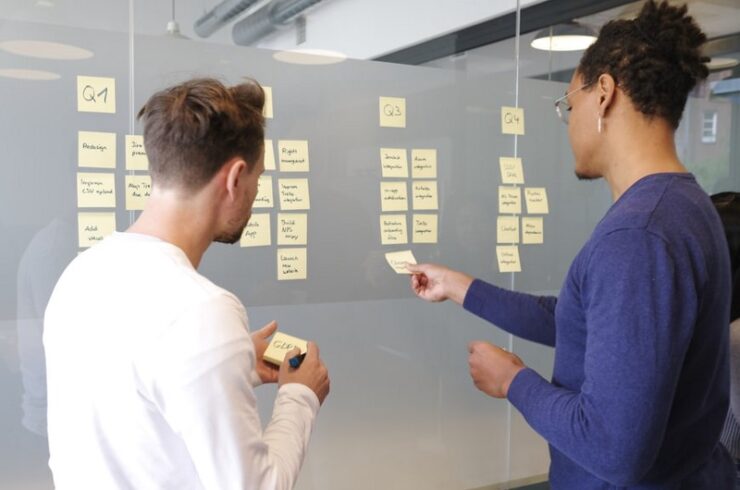 Kanban Vs Scrum: Which Is The Best Framework For You?

With programming departments swelling and software development cycles becoming more complex, agile project management is becoming a popular way for companies to keep on top of their coding efforts. Two of the most popular agile methods are Kanban and Scrum. But there’s a great deal of controversy over which one is better. In fact, it’s gotten so heated that people have started calling it the “Kanban vs scrum wars.”

Each method has its own set of pros and cons, and some are better suited for certain types of projects than others. In this article, we’ll take a look at the key differences between Kanban and scrum, and help you decide which one is best for your project.

Kanban is a visual project management system that was created by Taiichi Ohno, a Japanese industrial engineer who worked for Toyota. The goal of kanban is to optimize the flow of work through a process, and it does this by using a board with cards that represent tasks.

The kanban board is divided into different columns, which represent the different stages of the process. As new tasks are added to the board, they are assigned to a specific column based on their stage in the process.

Here’s an example of a kanban board in-action:

The key benefits of kanban are that it helps to:

– Visualize the flow of work through the process

– Identify and fix bottlenecks in the process

There’s something about kanban that’s just “simple” and “intuitive” which makes it a popular choice for small businesses and startups. Being able to see what still needs to be done and what’s been completed is really helpful for keeping track of your progress.

Scrum is a framework for agile project management that was first introduced in the early 1990s. It’s based on the idea of “self-organizing teams” that are able to manage their own work and are able to adapt to changes quickly, increasing business efficiency, time management, and improving feature quality.

The key components of scrum are:

This sounds complicated, but in practice it’s actually quite simple. The product backlog is just a list of all the features that need to be added to the project, and the daily scrum meeting is a short meeting where team members update each other on what they’re working on.

The sprint planning, review, and retrospective meetings are where the team decides what to work on during the next sprint, reviews their progress, and discusses any issues that arose during the sprint.

One of the key benefits of scrum is its flexibility. If a team discovers that they need to add more features to the project, they can do so by adding them to the product backlog. And if they realize they need to remove a feature, they can do that too.

In contrast with kanban, scrum is better suited for projects that have a lot of unknowns. The scrum framework allows teams to adapt quickly to changes, which is essential when you don’t know what the final product will look like.

Why do some people prefer Kanban?

Kanban is often favored by teams who want to move towards agile but don’t have the time or resources to do a full-blown scrum implementation. It’s also seen as a good way for busy teams to manage and track their work without getting bogged down in too much process — statistics have actually shown that kanban is more effective at managing project schedules (though with some caveats).

Kanban is based on the theory that work should be pulled through the system, rather than pushed. This means that you only add new tasks to the backlog when there’s capacity in the system to take them on.

This approach can be helpful for teams who are constantly under pressure to meet deadlines. It ensures that work is only added to the system when there’s enough time and resources to actually complete it.

As a pipeline-based system, Kanban is also great for managing and tracking work in progress. You can use it to visualize your workflow and see where bottlenecks are occurring. Some teams with primarily visual learners find Kanban helpful for this reason.

Why do some people prefer scrum?

On the other hand, scrum is often favored by people who want more of a hands-on approach to their project management. With scrum, there’s a lot more micromanagement and team members are typically required to attend daily stand-up meetings.

This level of oversight can be helpful for teams that are new to agile, or for teams that have had trouble with completing tasks on time in the past.

But don’t think that scrum doesn’t also include the heavy focus on visuals and simplicity that Kanban is known for. In fact, the “burndown chart” is a key part of scrum, and it’s used to track the progress of a project in real-time.

Burndown charts help team members see how much work has been completed on a project, and how much is left to do. This helps them stay on track and avoid any nasty surprises near the end of a project.

In addition, scrum also includes a “sprint” which is a short, time-boxed period where team members are focused on completing specific tasks. This can be helpful for teams that need more structure and clarity when it comes to their work.

So, as you can see, scrum has its own set of benefits that can be helpful for certain teams. But it’s important to keep in mind that scrum is not a one-size-fits-all solution, and it may not be the best choice for your project.

In addition to kanban vs scrum, there are a number of other agile project management methods. Some of the most popular include:

Each has its own strengths and weaknesses, and some are better suited for specific types of projects than others.

XP is a software development methodology that favors rapid feedback and constant adaptation to change. It’s based on a set of values and principles that include things like “responding to change over following a plan,” and “working software over comprehensive documentation.”

Crystal is a project management methodology that focuses on delivering well-tested, high-quality software. It’s based on four values: communication, feedback, simplicity, and respect.

Crystal is well-suited for projects that require a high degree of quality and precision. It can be difficult to apply Crystal to projects that are in a state of flux, and it’s not as well-known or popular as some of the other agile methods.

FDD is a project management methodology that focuses on delivering features in a timely and predictable manner. It’s based on five core disciplines: analysis, design, build, test, and deploy.

FDD is well-suited for projects that have clearly-defined features and requirements. It can be difficult to apply FDD to projects that are in a state of flux, and it’s not as popular as some of the other agile methods.

That said, each of these agile methods has its own strengths and weaknesses, and most of them have been discontinued in favor of Kanban and scrum.

As discussed, the age-old question of kanban vs scrum is not so easily answered. Both methods have their own strengths and weaknesses, and which one is better for your project depends on the specific needs of your team and organization.

– In general, Kanban may be a better choice for teams that are just starting out with agile, or for projects that are less complex. It’s a highly visual method that is easy to learn and can be implemented quickly.

– Scrum is a more traditional agile methodology, and may be better suited for larger teams with more experience working in an agile environment. It’s also more suited for complex projects with many moving parts, since it includes specific procedures and rituals (like the Burndown Chart) that help keep everything organized.

There are also a few other things to keep in mind:

– Though many people think the two approaches are mutually exclusive, it’s actually possible to use elements of both Kanban and scrum in your project.

– It’s also important to note that neither method is perfect, and there are times when one or the other may be more appropriate. As with anything else, experimentation is key!

So which approach is right for you? The answer to that question depends on the specific needs of your team and organization, but hopefully this article has helped give you a better understanding of the key differences between Kanban and scrum.